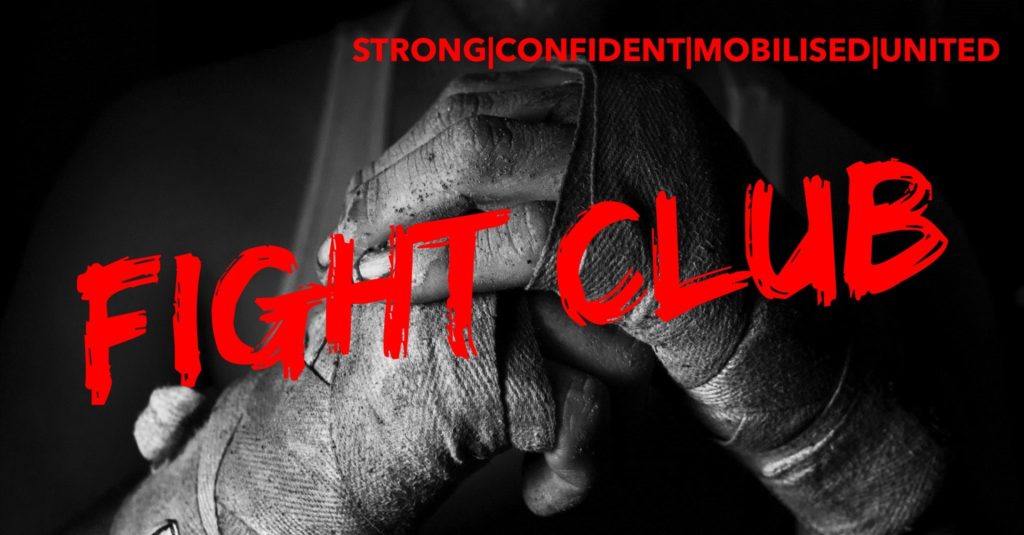 We launched Fight Club 59 last night Thursday 8th September 2018 and what a night it was.  Over 40 men gathered together and the atmosphere was electric.

The curry was meant to arrive at 7:15pm but due to an error in communication, it did not arrive until near 9pm.  This did not dampen the evening though and the evening kicked off taking some good medicine, watching a comedy video which went down very well.

This was followed by a darts competition and Graeme Campbell was a clear winner.

This was followed by a great time of worship led by George Keenan and then Aaron Dowds shared some of the vision of Fight Club 59 starting with this motivational video which touched on the cry in every boy for support, encouragement and love from a father.

Aaron shared some of the vision of Fight Club and its goals which can be read here.

I shared how men often suffer because of the lack of a father figure calling greatness out of the boy and the lack of a father figure who sees the king inside each boy and calls out that king in each boy.  I shared about the crisis of confidence in men and in our culture and shared the story of how my dad shouted to me from the sidelines when watching me play football.  I was around 12 years old and playing in a cup final.  My dad roared:  “Stop passing the ball.  You are way better than every single person on this park but you keep passing it every time you receive it.”  He saw my issue was a confidence issue and was calling out greatness inside of me.  “Next time you get that ball, run as fast as you can, beat every single person in front of you, hit the by-line and cross the ball.”  And that’s exactly what I did.  I hit the by-line skinning three guys and crossing the ball perfectly which was headed into the back of the net that day.  We drank champagne celebrating the winning of the cup that day.

That was a vivid memory and a great illustration of the power of someone drawing greatness out of us.  It illustrates the restricting power of lack of confidence and how it leads us to keep passing the ball.  It also show the transforming power of confidence when a father figure calls out the greatness in us and shows us how much He believes in us.

That’s exactly what Father wants to do for every single one of His children as He is described as a father to the fatherless.

Steven Paton also shared a powerful story of how God did an amazing work of healing and transforming in his own life and challenging all men to be fully committed to the good fight, not just playing lip service but putting skin in the game and serving our head coach Jesus with full commitment and enthusiasm.

The night finished off with an amazing curry and the level of noise as guys opened up and shared to each other was such a delight to hear.

There has been so much great feedback from our launch night and we are so looking forward to continuing these nights, continuing to improve and develop them and see so many more men winning the good fight as we join together as Fight Club brothers.

Glasgow Prophetic Centre published these words on Friday 7th September 2018 which was great confirmation and encouragement that the vision of Fight Club 59 is critical and urgent.